BEZBOG, Bulgaria – Pale blue sky, under which a long white path runs through the pine forest. The sun shines on the slopes, covered with fresh snow. Its light gleams and plays with the little snowflakes, transforming them into miniature illuminating diamonds.

In search of this beautiful atmosphere, every winter season, many people decide to spend their winter holiday up in the mountain. However, not many can afford a long ski vacation, as it is usually considered an expensive leisure. Therefore, as the winter season is still on, this article will lead you to a place, called Mount Bezbog, part of the Pirin Mountain. Located less than 20 km away from Bansko, it is a fascinatingly beautiful region, offering a 5 km slope and there is a much wider area available for freeriding at a low cost. 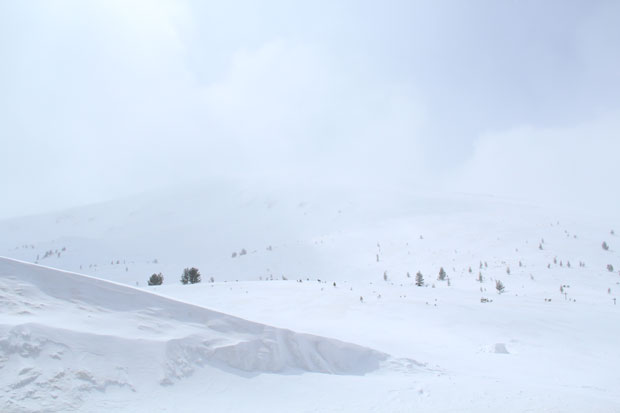 There are plenty of winter resorts in Bulgaria, which offer various opportunities for both snowboarding and skiing. Although, the country is still among the cheapest winter destinations in Europe, locals often complain that famous winter resorts such as Bansko are significantly overpriced.  Bezbog, in contrast, is an attractive alternative destination to the famous Bulgarian resorts with its 30-leva lift pass per day or one half of the lift pass in Bansko.

Bezbog is a small winter resort near the town of Dobrinishte, Bulgaria. Translated from Bulgarian, the name means “no God’s land”. People often say there is no God in this area, but a really unique atmosphere and special natural energy. It is hard to put into words the feeling that someone gets when visiting this place. The purity and solitude it has, the calmness it brings and the desired relaxation it offers, work as an energizer, better than a Red Bull, for both human body and soul.

What distinguishes Bezbog from other mountain resorts in Bulgaria is the amazing night sky. However, it is not only famous for the beautiful natural surroundings, as the flora is really specific there, but also for the “freeriding” opportunities that the region offers. In other words, one can freely shred the fresh snow, zigzagging between the pine trees, exploring wild areas and competing with the power of nature and the challenging environment.

“I come here every year for the past 10, because of the place, the people and the magic,” said Boryana Zlateva, a passionate snowboarder, well-known in this field. “Indeed, the magic is what brings me here back again and again.”

I met Zlateva on Bezbog, celebrating her birthday with friends. She is among the people that do not miss an opportunity to visit the place. According to her, many people that she does not know often just come to her and want to meet her because they have seen her snowboarding there.

Tired after a whole day on the slope, or just between the rides, one might take a rest in the Bezbog hut, where I actually spoke with Zlateva. Although not a luxurious hotel, the hut is warm and cozy. It is decorated just the way most such buildings, constructed during the Communism, are.

There is a large dining room with wooden tables and a small buffet, where people order food. Pictures of mountain views with high peaks and pure lakes are hanging on the wood-covered walls. Quiet radio sound supplemented by some murmuring between the tables vocalizes the space. Most of the visitors eat the homemade chicken soup, prepared on the spot, which is famous as a medicine that can both warm your soul in the cold weather and heal any hangover.
The hut, as one can see it today, was built in 1981. Georgi Durkov from Bansko is its Residence Director since 1988. He lives and works there 365 days a year. Thus, he has been responsible for both the facilities and the employees for quarter a century now. “I ride neither snowboard nor ski, because I do not have the will for these sports,” said Durkov and surprisingly added that he prefers boxing.

According to the director, Bezbog is a popular destination for both winter and summer tourism, depending on people’s preferences. “Our region here is the most beautiful part of the Pirin Mountain, especially during the summer. Therefore, I think I cannot find the right words to express my impression,” said Durkov. When the snow melts during the summer, visitors can enjoy the beauty and rareness of the flora and the mirror views of the several lakes near the hut.

My curiosity leaded me to ask Durkov about the name of the region. Why on earth would someone call a place “No God’s Land?”  Of all the legends the Director knew, he shared the most popular one.

During the time when Bulgaria was under Ottoman Rule, the Turks were trying to enslave the whole population in the area.  However, the people who lived here knew the region and the specific landscape really well, so they knew where to hide and how to climb higher and higher despite the disastrous weather conditions. Therefore, they managed to escape when the persecutors died. Only one person from the Ottoman posse survived and he came down the mount screaming: “There is No God in this land,” from where now originates the area’s name.
Unfortunately, no one can confirm if the legend is true or not. However, what is for sure is that, the region attracts more and more visitors each year. Kaloyan Genchev from Varna is another snowboarder who annually visits Bezbog for the past 9 years. He expressed extremely positive impression from the place and added that what he likes the most is that when he goes there his mind is absolutely released from everything.

“When someone gets here, he aims at getting everything out of this experience, enjoying the nice conditions on the slope,” said Ganchev. “Everybody here tries to be among the first people on the slope, in order to shred the fresh snow powder where no one has ridden yet.” To be the first one touching the shining snowflakes is the main reason why he gets up earlier than the rest of the visitors in the Bezbog Hut.

Ganchev prefers Bezbog than any other resort in the country. In his words, Bansko is a “successful but too big and too crowded village.” Therefore, he cannot classify it as the best winter destination in Bulgaria. However, he has a lot of friends that work as ski or snowboard instructors in Bansko, so he often visits them. According to him, it is up for the people to decide where to go, but if it was for him, he would always choose Bezbog.

Indeed, the fascinating natural energy of the region brings more people here. “Dobrinishte and especially Mount Bezbog in Pirin Mountain is a favorite winter spot for me and my friends,” said Andrea Paunova. “It’s been 5 years in a row that we go there and I don’t think the tradition will break any time soon.”

It does not really matter if you are a professional winter athlete or just an enthusiast, visiting the Bezbog Mount might become your tradition as well. So why don’t you grab the snowboard and explore it?